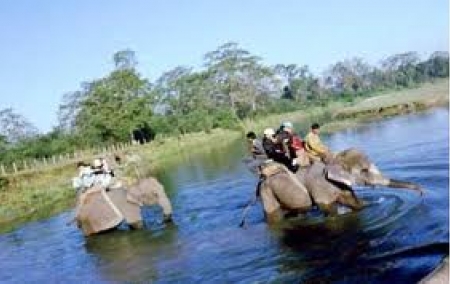 Chitwan became Nepal’s first National Park in 1973. The UNESCO declared the park a World Heritage site in 1984. It is in the southwestern of Kathmandu, the capital of Nepal, which covers 932 square km. The park boundaries have been delineated by the Narayani and Rapti River in the north and west, and the Reu River and Someshwor hills in the south and south-west. Its eastern part borders the Parsa Wildlife Reserve. There are roughly 70% of Sal (shorea robusta) trees, 20% of grassland in the forest of the national park.

There are more than 43 species of mammals in the park. More than 45 species of amphibians and reptiles are found in the park, some of which are the marsh mugger crocodile, cobra, green pit viper and various species of frogs and tortoises.

The estimated population of rhinos is about 400. We can see the wild elephant, white footed gaur (the world's largest wild cattle), leopards, wild boar, sloth bear and several species of deer including the spotted, barking, and Sambar and hog deer, in this park. It is the home of one-horned rhinoceros and harbors, including the Royal Bengal tigers. The moist areas and numerous ox-bow lakes are perfect for marsh crocodiles. Some of the other animals found in the park are Sambar deer, chital, barking deer, sloth bear, common leopard, palm civet, wild dog, languor and rhesus monkeys.

The park hosts around 500 species of birds. The giant hornbill, black stork and white stork are, among others, the endangered birds. The commonly seen birds are peafowl, red jungle fowl, and different species of egrets, herons, kingfishers, flycatchers and woodpeckers. March and December are the best time for bird watching.

The Tharu indigenous people are pre-dominant in this area. They have their own language and unique culture and tradition. There are different types of lodge available inside and outside of the park to be chosen as per your budget and interest. Usually, tourists spend 2 nights and 3 days over there with possibility to extend. The following are the main activities in Chitwan.